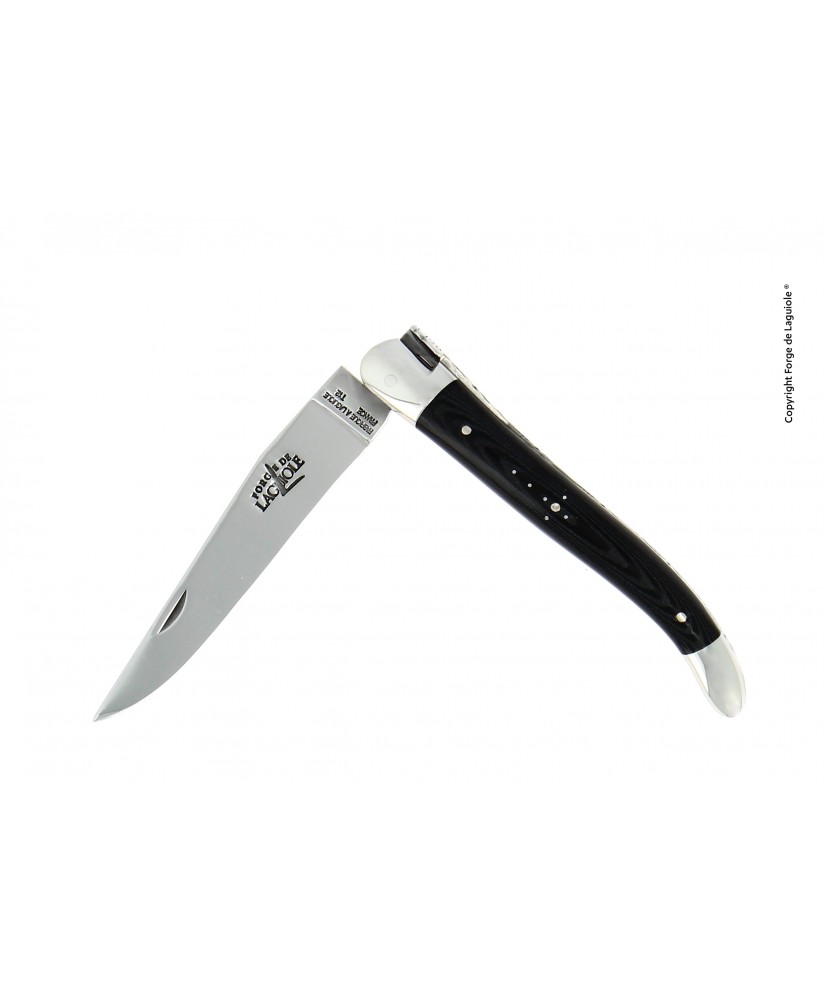 The designer table knives, contemporary models with pure lines and discreet elegance are designed by the greatest French architects and designers.
Traditional, they are composed of a fixed blade, a finely decorated tang and of course the bee which is one of the symbols of the Laguiole knife. The handles are decorated with shiny stainless steel bolsters.

A cutlery tradition dating back more than a century

In 1828, the first cutler settled in Laguiole to make a living from his trade. It was also at this time that the first closing knife was made, the straight Laguiole knife, a knife with a Bourbonnaise blade with a centered point, a fly without decoration and a spring with a lock.

Between 1850 and 1860, the current shape of the Laguiole knife was gradually refined.

As early as 1880, the first 3-piece knives were designed and manufactured. They are composed of a corkscrew following the request of the Aveyronnais left to conquer the Parisian cafés.

In 1909, the first bee appeared on a Laguiole knife. According to the legend, its presence on the knives, is a tribute to the courage of the inhabitants of Laguiole by the emperor Napoleon himself.

The First World War will lead to the disappearance of a part of the workforce in Laguiole, of which only three craftsmen will continue to manufacture a very small quantity of Laguiole knives.

In 1985, Jean-Louis Cromieres, the mayor of Laguiole, organizes the restart of the Laguiole knife production with a team from the Aubrac plateau. This is the birth of Forge de Laguiole® which makes this dream come true in 1987.

Today, Forge de Laguiole® knives are still made according to the artisanal cutlery tradition of that time and in their factory located on the Aubrac plateau at 1100 meters in the village of Laguiole itself.

Its landscape with a strong personality impresses with its immense beauty and singular tranquility. Giving off a special energy, the village is the ideal melting pot, which inspires day after day, our cutlers.

Each Forge de Laguiole® knife bears the signature of their cutlers. The quality of the knives and corkscrews is the expression of the power and beauty of our landscape and our remarkable environment.

The manufacture of corkscrews

No customer comments for the moment.

Two locations to serve you